What if all you needed for healing was a drink of pure water?

Most of us would be out of luck. All of our drinking water—even the best of it—has been chemically treated and travels long distances to get to us.  It arrives into our drinking glasses drugged and dazed. Its life-giving energy is depleted.

Water is the most abundant nutrient in the body, comprising two-thirds of the body’s mass.  It’s no wonder that the quality of the water we consume—whether straight up or part of other drinks and food—will affect our bodily systems. Despite the challenge of getting pure water, there are ways we can respond to transform the situation, if we choose to do so.

What’s in your water supply?

Though the water we pour from our taps may seem clear, what’s in it may be hidden. Quality assessments from your local water source may report toxins within acceptable limits, but that threshold may allow enough harmful elements to inhibit healing and maybe cause problems.

Washington, DC, where I live, just released a water report that provides a good example of how cities treat their water supply and communicate results. A flyer in the mail gives a one paragraph summary which concludes that “test results show that your tap water continues to surpass the U.S. Environmental Protection Agency drinking water standards.” It sends the reader to a website if they care to learn more. You should care, wherever you are, because DC is typical for how city systems in the United States treat water.

The website, which goes into greater detail, says water from the Potomac River is collected into an aqueduct and sent through a treatment plant.

The website states that “Chloramine is a common disinfectant used to protect water supplies from harmful bacteria and viruses that can be found in rivers and streams.” If it’s killing bacteria and viruses, what might it do to the bacteria that live within our digestive system? Researcher Paul Pitchford, an expert in whole foods nutrition, points to chlorine as a chemical which, when regularly ingested, can deplete vitamin E, destroy beneficial flora in the intestines, and may be linked to vascular disease.

As for fluoride, there are two kinds: Calcium fluoride and sodium fluoride. Pitchford contends that sodium fluoride is a toxic by-product of the aluminum industry which was expensive to dispose of until cities were persuaded to put it in the public water supplies for tooth decay prevention. It may or may not protect teeth. There is some evidence, however, that sodium fluoride can inhibit proper functioning of the thyroid (leading to excessive height and weight), contribute to premature aging, and interfere with the immune system. As a result of research in Europe, sodium fluoride in public drinking water is now banned in most European countries.

When water leaves the treatment plant, it travels through miles of pipe to get to homes. Pipes—whether iron, lead, or copper—get corroded by dissolved oxygen or chlorine in water. Without orthophosphate, water can absorb high levels of lead from pipes, which happened in Flint, Michigan. But overuse of phosphates, also used in fertilizers and by commercial laundries, can end up in the surface of lakes, rivers, and the ocean, upsetting their ecosystem.

We don’t want to drink water with overgrowths of bacteria or virus, so we have to accept some form of purification. To offset the chemical load, the DC water department website (not the mailed flyer) provides additional recommendations for residents using tap water.

Last time I was sick it involved my personal water system—my bladder. Complications from an infection made drinking mineral water a key to restoring my body’s chemical and electromagnetic balance. While a few bottles are affordable, it’s too expensive to become the only water source for drinking. Even if the contents are better (which isn’t a certainty), any source of bottled water travels long distances (leading to the dazed factor).

Water is a very fluid element. It can easily be a liquid, solid, or gas. It’s known as the universal solvent because of its ability to cleanse and to absorb molecules from whatever it comes in contact with. Good for brewing coffee or tea; bad for sitting for long periods in a plastic bottle.

There’s also some evidence that water can store information and respond to sound waves, including voices. Japanese researcher Masaru Emoto fell in love with microscopic images of water crystals which he took when they were exposed to either positive words—such as love, peace, and thank you—or negative phrases such as “I hate you”.

In his book The Hidden Messages in Water, Emoto illustrates the dramatic differences between the two trials; results show either dramatic snowflake-like creations of detailed beauty or dull blob-like shapes. While some people may be rightly skeptical of the scientific validity of such research, anyone fascinated by microscopic images and aware of subtle vibrations will sense some truth in it. At the very least, the photos reinforce an appreciation of the beauty in water molecules.

The Last Step in Purification at My Place

So, hoping to make my drinking water more beautiful, happier and healthier, I began to thank it. Every morning I pour filtered water into two glass bottles. I add a pinch of sea salt to mineralize it. Then I shake it slowly back and forth in a wave like motion, while saying my simple mantra: “Water, I thank you for giving us life and give you life in return”. I place the bottles in the sun to charge them with solar energy during the day. It’s become a ritual of gratitude that puts me in touch with the water around me and within me. 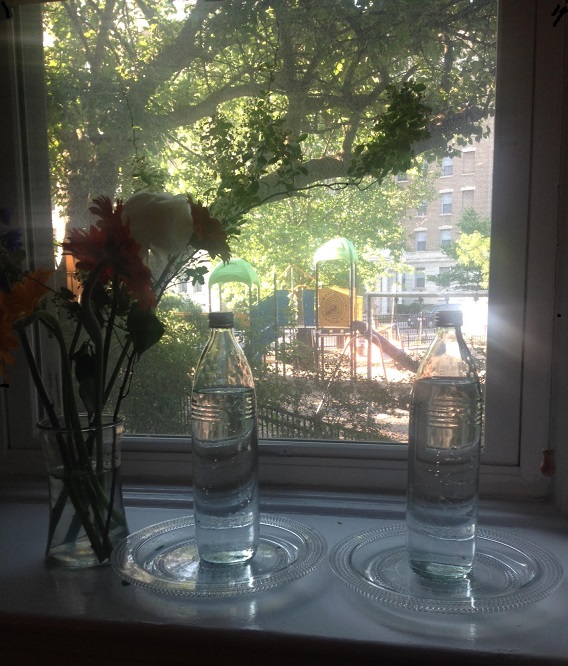